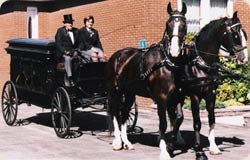 Horse Drawn Hearse dating back to the late 1800’s. Dawn purchased the hearse in 2006 and while it needs some restoration work she entered it in the 150th Durham Fall Fair Parade, September 2008.

Once restoration work is complete it will be available to the families she serves.

The Funeral Business has seen many changes over the years. Prior to having an actual “Funeral Home”, caskets were built at the local furniture store, visitations were held in the homes of the deceased and funeral services were also held in the homes or local churches.