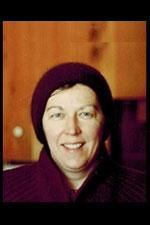 A mother, former flight attendant and government employee, friend of stray animals, human and otherwise, Jean Adie Zwicker (nee Muzzell) passed away peacefully, with family and friends at her side, the evening of Wednesday, January 23rd at Toronto Western Hospital. She had suffered a massive stroke the previous Friday evening following heart surgery.

Born in Owen Sound, Ontario on March 20, 1938, Jean came to Toronto when she was 16 to work as a secretary at Toronto Iron Works, then became a long distance operator with Bell Canada. Next she became a stewardess with Trans-Canada Airlines in 1962, training in Montreal.

"Our chief instructor," she recalled, "cautioned us to never become involved with the male air crew. Later we found out that she was having an affair with a captain the whole time."

She met Barrie Zwicker, a Globe and Mail reporter, and they began dating.
On Nov. 30, 1963, while they were engaged, Barrie heard on a late afternoon bulletin on CBC Radio that a Toronto-bound TCA flight had crashed shortly after takeoff from Montreal killing all aboard, the worst Canadian airline disaster to that date. Jean was working a Toronto-Montreal "block" that month and specifically that flight. Shocked, he tried to reach "crew sked."

Then his phone rang. It was Jean, calling from Windsor. She'd traded flights that day with another stew who'd asked if she could take the Montreal run because she wanted to do some Christmas shopping there. Jean, always generous, had obliged. What followed, according to made-up mathematics, may have been a one in a thousand chance. She suffered survivor guilt for a long time.

Barrie and Jean were married at Toronto's First Unitarian Church Feb. 1, 1964. Although this made her ineligible to continue flying, when "crew sked" found there were too few stews available to staff flights, they got the green light to call up married stews after all. Jean continued flying.

After Barrie left his job as education reporter at the Toronto Star to earn a precarious living freelancing and later as an independent publisher, Jean was a mainstay of the family. She worked for the Ontario government as a "GO Temp," in the ministries of the Attorney General, Energy, and Environment, making lifelong friends along the way.

Her favourite hobby was gardening. She worked with limited plots, making the most of them, growing enough vegetables to reduce the family's grocery bills.

According to the cardiologist at Toronto Western, the chances of the fatal turn that took her was one in a thousand. Between those two strokes of luck, one favourable for her, the other the opposite, she loved and was loved for 56 years. All the doctors, nurses and other staff at the hospital were extremely competent and caring. Our thanks go out to them all.

She leaves her husband Barrie, daughter Zena, son Gren (Beth), and granddaughter Leah, all of Toronto; her first daughter, Shirley Miller of Durham, and a sister, Beatrice Heighes of Collingwood.