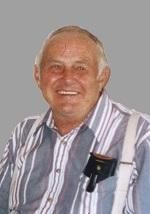 A funeral service celebrating Newman's life will be held at the Durham Legion, 271 Bruce Street North, Durham on Friday at 1 p.m., with visitation being held prior to the service from 12 - 12:45 p.m. Spring interment at Trinity Anglican Cemetery.

As an expression of sympathy, memorial donations to the Durham Legion, Alzheimer Society or the charity of your choice would be appreciated by the family.