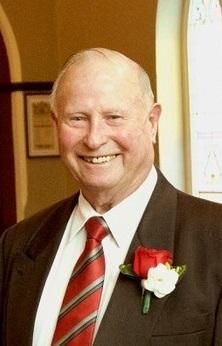 Darrell Dickie Dewar of Hanover, formerly Durham, Ottawa and Moncton, New Brunswick, passed away at the Hanover and District Hospital on Friday, November 12th, 2021, in his 86th year.

Darrell is survived by his three grandchildren, Miriam Dewar, Abigail Tkachenko (Andrew), and Jeremy Dewar, who have all been the source of his greatest pride and daily joy. He is also survived by their mother Lisa Vanderkwaak (David). All reside in Alberta.

His "Southern Family", including Kim, Karla, Kevin and Kris and their families mourn his passing and will remember him forever.

Darrell is predeceased by his wife Isabel Peter, his wife Catherine Buschleiter, his son Darwin Dewar, his sister Ruth Jensen, his sister-in-law Betty Peter, and his brother-in-law Jannich Nielsen.

Born in Moncton, New Brunswick on March 11, 1936 to Celia Dickie and George Dewar, Darrell grew up playing hockey in the winter and golf in the summer.

In 1955, at 19 years of age, Darrell joined the Royal Canadian Mounted Police (Regimental Unit 18996) and along with Isabel, travelled the world and resided in numerous countries including, but not limited to, Chile and Japan. While his work took them away from their families, their return home to Ontario or New Brunswick was always cause for celebration, and a good feast of corn on the cob or lobster. Retirement in 1993 meant he could spend more time out west visiting with his grandchildren.

While understandably tight lipped about his work, he was recognized for his efforts both within RCMP and other policing and security institutions around the world. Darrell was the one of the first officers to work in CSIS upon its creation.

If you met Darrell, you were blessed. If you didn't have the opportunity, you have missed out on an individual who was perfectly suited to every situation. Formal or casual, he could mingle and interact with wonderful stories and impeccable manners. Darrell was an excellent choice for a toast or grace, and never shied away from the opportunity. Often described as a gentleman and a charmer, he could also be incredibly funny and loved the chance to tell a good joke, or to hear one. Darrell kept his positive disposition throughout the trials of the past few months. Anyone who had the pleasure of interacting with him liked him.

Outside of his family, golf was his passion and he enjoyed it well into his retirement. Having made the choice to make policing his career when he could have been a professional golfer, he devoted his senior years to getting as many hole-in-ones as possible. Darrell won two silver medals in the Worlds Master Games (Seniors Division - 2005) in Edmonton, Alberta. He won numerous trophies for his golf prowess, and donated them back to clubs to use them again for future championship presentations. Darrell would willingly share stories of courses he had played around the world. He coached many young golfers and passed on his skills and insights to a new generation.

In his retirement Darrell volunteered as a Director on the Town of Durham Police Services Board. He was also a proud member of the Durham Presbyterian Church.

Donations in memory of Darrell may be made to the Durham Presbyterian Church. Arrangements have been entrusted to McCulloch-Watson Funeral Home in Durham.