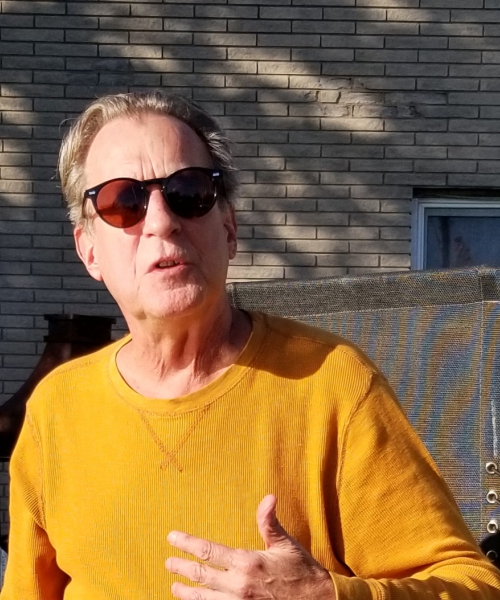 Doug was an adventurer throughout his life, having sailed around the world literally sailing, using the power of the wind. His passion for travel never ceased and his bags were in fact packed for a Mexico/Texas trip on the day of his untimely passing. Doug was an accomplished head chef of some of the most prestigious restaurants and bistros in Toronto in his younger years. Under Doug's leadership, many young cooks began rewarding and successful careers.

During his Toronto years, Doug was engaged in the performing arts community and there are wonderful stories of his encounters with legends including Bruce Springsteen, Long John Baldry, Nash The Slash,  Mick Jagger, George Thorogood and countless others.

He was a talented mosaic artist having completed prestigious commissions to create and install in numerous buildings across Canada.

He was an artist and the garage door of his last home is testament to his talent.

He had an appreciation for many things and an eye for detail found in special and unique items.

Doug was a generous soul, and he loved doing things for people and he had great love for animals and wild birds. He loved the outdoors, portaging, hiking and kayaking.

Doug is survived by his Parent's, David, Lynn, and his four sisters, Bonnie, Ivy, Wendy & Gail.

Per Doug's wishes, cremation has taken place and a memorial celebration of life will be held in Doug's honour at a later date.

From the entire Foster family, we are sending our sincere condolences to the family at this must difficult time. May you find comfort at this time
Don and Deanna, Marge and the Foster families