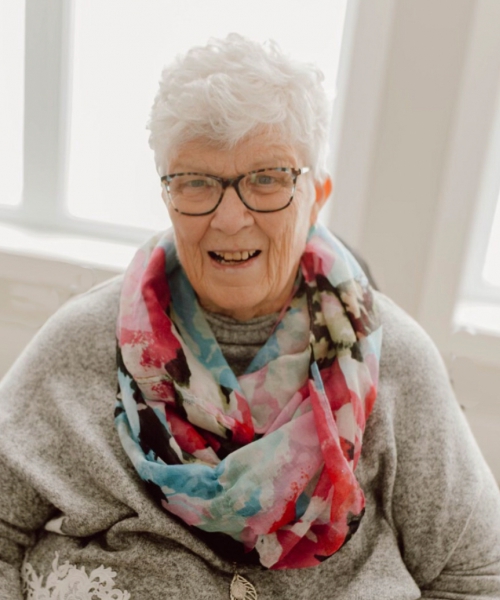 Helen Mary Murphy (nee Ready), formerly of the Dundalk area, passed away peacefully after a brief battle with cancer at Grey Gables, Markdale on Wednesday, September 28th, 2022, in her 83rd year.

She will be deeply missed by her children: Shawn (Terri) of Lake Eugenia, Colleen (Michael Ryan) of Oakham, England, and Anne (Griffin Russell) of Ladysmith, BC. Cherished grandmother to Riley (Jane), Kira (Stephen), Sebastian, Hugh, Romy Lou, Taj and Beau. Dear sister to Eileen Hoffman of Beachburg, Angela (John) McEachen of Douglas, Patrick (Clare) Ready of Renfrew and Kevin Ready of Peterborough. She is also survived by brother and sister in laws, John (Rosemary) Murphy of Hanover and Patrick (Doreen) Murphy of Orangeville and many loving nieces and nephews and their families.

Helen will now be reunited with her loving husband Louis who passed away in March this year; as well as loving parents, Marina and Harold Ready; infant son Joseph; her twin brother, Thomas Ready, and brothers-in-law and sisters-in-law: Vincent and Louise Murphy, Tom and Elaine Murphy and Daniel Hoffman and her dear in-laws, Alice and Joseph Murphy.

Helen was born in Osceola, Renfrew County together with her twin brother Tommy. She was raised on the family farm and later moved to Pembroke. As a young woman, she held office roles in Ottawa and Brampton. She married Louis in 1966 and moved to Grey County to their farm in Proton Township. While raising a family, she was always busy. She worked as a loyal school bus driver with Charterways for 28 years. Helen also worked as a Red Cross homemaker for over 30 years, caring for many individuals in the area. Helen was very involved in the community, volunteering with many organizations including the Fair Board, the Catholic Women’s League, the schools and Community Church Service organization. Her community service was lifelong and she enjoyed volunteering at the Grey Gables gift shop until last month.

The family will receive friends at the McCulloch-Watson Funeral Home, Durham on Friday, October 7th from 5 – 7 p.m., where a vigil prayer service will be held at 4:45 p.m. Funeral mass will take place at St. John the Evangelist Roman Catholic Church, Dundalk on Saturday, October 8th at 1 p.m. with burial to follow at St. Patrick’s Roman Catholic Cemetery, Southgate.  A recording of the service will be available for viewing on the Funeral Home website on Sunday.

In lieu of flowers, memorial donations can be made to Grey Gables Staff Association or Centre Grey Health Services Foundation.

Celebrating the life of Helen Murphy